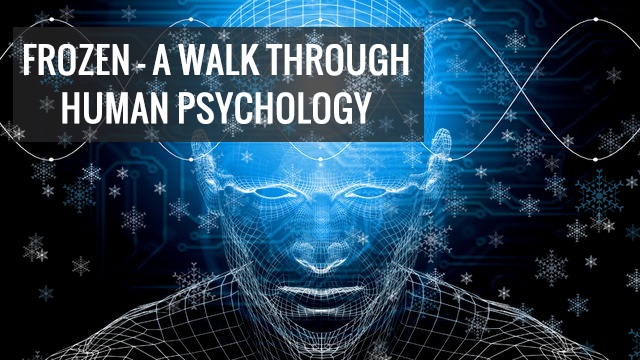 While Elsa used to conceal her feelings and be scared of opening up to the world, Anna was all about her individuality and being open with her emotions. Elsa feared the world might not accept her the way she was, while Anna just didn’t care enough to think about that. Anna was happy in her own bubble and thus was embedded with confidence. In short, those two characters were like each other’s counterparts.

One of the largest themes of Frozen is the mere representation of an introvert and an extrovert trying to understand and accept each other – to unlock what’s locked within an introvert. Moreover, they highlight underlying causes of introvert-ism, and introduce the idea of getting to its root in order to boost up an introvert’s confidence.

Why Are Elsa & Anna Two Sides of the Same Human?

As they are sisters who grow up side by side, they are, in a way, two faces within the same person. They could be two sides, two opposing desires, however, you wish to term them. There is no better exemplification of this than the disparate ways they deal with the death of their parents.

The death of one’s parents means that a human ends up drowning within the depth of their own personality and feelings – there’s a lot of turbulence within a human mind. The basic clash is between those two levels of consciousness, namely id (Anna) and superego (Elsa). Ego (the parents) exists within the human being as a constant characteristic.

Superego is the internalization of cultural teachings from all around us. It is like an inner critic that stops us from being whatever and whoever we wish to be. The basic purpose of the superego is to stop us from going against societal norms taught to us throughout our lives. Most of the time, our parents play a vital role in implementing those teachings and thoughts within our minds and personalities. This level of consciousness aims for perfection, and as we all know, women are taught to act “womanly” in many cases. They are supposed to be quiet, closed, and submissive to the chauvinistic forces around them – or else it just isn’t ladylike of them. Thus, the role of Elsa was to suppress her desires and conceal her truths. She couldn’t be happy, nor could she be free. There was no liberation for her.

Moreover, she was okay with it. She was okay to be just a piece of the puzzle that wasn’t even hers to be part of. She was ready to cut off the sides that made her acceptable in her society, which is entirely sad. She strives for socially acceptable behavior and tries her best to diminish her own powers to a minimum until they explode out of the box like a party popper under pressure.

As her powers – which are actually urges if we think of it – take over, she ends up going into retreat. She leaves everything behind since the society doesn’t accept her. She is considered a taboo for coming out of her cocoon. Even before the world pushes Elsa away, she herself accepts that she is a monster. No one could have forced her out if she didn’t have this realization. That is what superego does. It inculcates the feelings of guilt and dismay within a human. Although Elsa was always accepted by her parents, she went out of control when there were no checks and balances on her. That is what happens when a fixation on a particular level of consciousness takes place.

ID can be described as the unorganized part of one’s personality. The id wants to just be as it wants. It seeks instant gratification and doesn’t care about societal norms that might force the superego to come into play. Much like id – Anna wanted to do as she pleased. She wore her big, fragile heart on her sleeve, just to be taken up by the first man who came here way. She didn’t think of the ramifications; she just went in for their so-called love without any second thoughts. It was all okay and fine since her heart said so. Anna was not organized and just wanted to have fun. She wanted to enjoy life to the fullest without thinking of the consequences that might come knocking down the family name or worse yet take the throne away. She just never took things seriously, and thus was never anxious about the effect of her actions. She desired instant gratification for her wants.

In contrast, Elsa (superego) tried to stop Anna from behaving out of the ordinary and being a slave to her heart’s desires. Repeatedly, Elsa kept telling her to stop and to be more like her. Even though Elsa actually wanted to go out and build a snowman with her, she wanted to impose upon Anna the same existence she had, which was being forced to stay in one room. Though this sad existence brought her much pain, she was ready to make Anna do the same just so society wouldn’t shun them upon the discovery of her powers.

ID works per the pleasure principle, and so did Anna. She was willing to leave everything behind for her “prince charming.” She didn’t care about anyone or anything and thought Elsa was somewhat jealous of her. Anna shows disinterest in understanding her sister’s point of view, and thus ends up putting everyone’s life on the line.

Elsa Over Anna – a stich to pitch!?

The movie changes when superego, at last, lets id take control. Elsa is shunned, and she runs away thinking of herself as a negative force. Anna, again going after her heart, wants to go save her sister. But what she fails to understand is that it was her who created the whole mess.

In the end, it was no one else but Elsa who saves the day. A true love’s kiss did the trick, but that kiss comes from Elsa. The point is that superego doesn’t force us into guilt so that we might get stuck in a monotonous lifestyle. Instead, it knows that if ID is allowed unfettered control, it will eventually get one in trouble. All Elsa wanted was for them to sustain a good life and their family’s name. The fact that Elsa is shown to be a single woman shows how difficult it is for people to get along with their superego. Anna – ID – is attractive and fun to be with. Everyone wants to play with Anna, especially since she is so gullible and naïve (classic id qualities).

But was Elsa right to suppress herself from any enjoyment in life at all?

No, being fixated on just one extreme of consciousness isn’t healthy or correct. Too much superego and you end up being an introvert, dying a little every day. Man is a social animal, and you do need to socialize. But you most certainly do not in any way need to socialize with those who might not accept you for who you are.

Voicing your opinion and calling out what’s wrong is not wrong in and of itself. But first, you need to be able to differentiate wrong from right. “Wrong” is how badly someone treats another living being, or being unethical and casting aspersions to ruin someone else’s standing. Wrong is making others wish for death because that’s what you do, instead of trying to create a fulfilling life for yourself.

ID is the only quality that is present within us from the second we’re born, maybe even before that. It just wants to get things done. The existence of ego or the parent body in Frozen was to sustain a balance between the two colliding personalities existing within their one huge body. As such, your balanced ego is good for you.