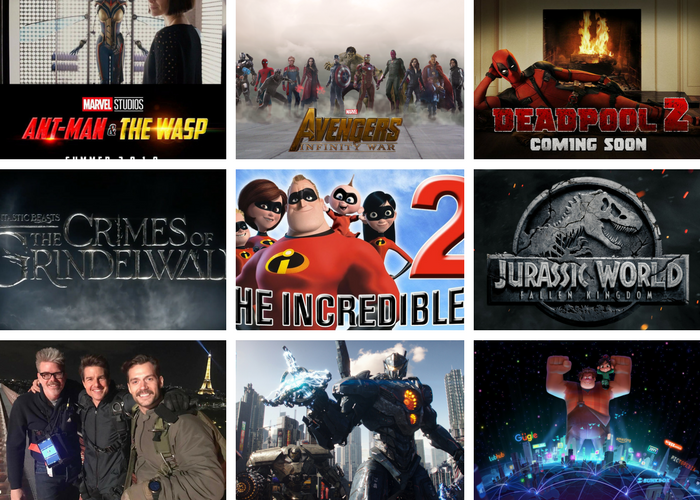 Movies are like dreams which come true for everyone since they depict an unspoken but shared bond between us all. Regardless of where we live and from what culture we belong to, movies have a way of bringing us together along the common boundaries of imagination, desires, wishes, and much more. The year has finally come to an end and 2018 is upon us, and it brings a lot of movie sequels. Some of which may have taken way much longer than expected, however, every single of them being highly anticipated by movie lovers and cinema-goers across the globe. Let’s take a look at the big screen hits expected to hit theaters near you soon this year:

Director Peyton Reed returns for the movie sequel to the 2015’s movie called: Ant-Man, along with all of the rest of the crew and old cast members. The plot follows the storyline set several years after the events of the Civil War saga, where Scott Lang tries to be a responsible father while balancing his life duties as Ant-Man as well. It is during an unexpected time, when he is called by Hank Pym, the original Ant-Man, to be sent on a mission with his daughter Hope Pym, who plays as the Wasp.

The movie sequel all Marvel fans are waiting for, and with all the hype created throughout the previous year, Avenger Infinity War revolves around the events concerning Thanos’ rise to power through the Infinity Gauntlet and the Infinity Stones. The entire Avengers team along with help from other Marvel superheroes try their level best to stop Thanos from destroying their world. The first part of the two-part movie sequel has tons of cast members with an exceptional fan following for each. It is undoubtedly one of the biggest movies to hit cinema this year.

Audiences across the globe crazily wait for the next big movie featuring the “mercenary with a mouth”. The movie sequel will focus on a new adventure involving Deadpool as he battles the yakuza, ninjas, and some aggressive canines, featuring Cable as a new character. The initial movie in 2016 was well received by audiences and critics alike, grossing over $783 million at the box office. Let’s keep our fingers crossed for the sequel to be just as appealing along with being original and not afraid to the take the risk.

The fantasy drama continues with the second film in the Fantastic Beast movie series. Fans were much amused to find the real identity of the original dark lord Gellert Grindelwald. While the movie left the viewers with a jaw drop, the movie sequel will shed more light with the plot focusing on the confrontation of the dark wizard with the famed Albus Dumbledore, while the warding world yet again goes into turmoil and battle of the ages is drawn. We hope the sequel dazzles and turns out to be as much spectacular as the first installment.

The much-awaited movie sequel which took nearly 13 years to come out, the Incredibles 2 will showcase some of the bizarre abilities of the superhero couple’s infant Jack-Jack who is presumably the strongest in the family. The story will feature Elastigirl facing new challenges while Mr. Incredible will face a more troublesome task of dealing with problems of his three super-powered children. We hope the fans get what they deserve with tons of action sequences, and much needed buffoonery along the way.

The action-packed Jurassic World comes back to life this year with the plot revolving around the unexpected eruption of the dormant volcano on the island where the prehistoric species are kept for rehabilitation. Now it is time for the humans to help these poor creatures escape their sad destiny once more so they can survive in the modern era. However, in the backdrop, there is a huge conspiracy that wants to eradicate both the dinosaurs and the world with it.

The sixth installment in the action-packed thriller series featuring agent Ethan Hunt along with his professional espionage team in a new challenge which they must overcome. Expect nothing less than a world pivoting plot that requires the hero team to deliver on every aspect of their skills and dexterity to save humanity from yet another villain hell bound on destroying the world as it is.

It’s a brave new generation when it comes to the movie sequel to the original Pacific Rim feature film of 2013. Focused after 10 years after the initial battle with the otherworldly monsters, as things haven’t changed much over time. As technology has evolved so has the monsters and the Jaegers now must combine their forces together in order to face the threat of humanity’s extinction at the hands of the new Kaijus.

In order to save and fix an arcade game, Ralph and Vanellope now must embark on a new adventure which takes them into the nearly limitless world of the internet in search of a spare part. Together the pair will encounter new worlds, customs, characters, and meet the Disney Princesses along the way. The cast from the first movie returns to offer their voice talents for the sequel in this animated feature fantasy film.

This year movie entertainment will soar towards the skies with all of the new and upcoming movie sequels we all are direly waiting for to hit the big screens. However, if you want to catch up on the predecessors in full HD picture quality and splendid sound then do visit Digital TV Bundles for the best in home entertainment and cable TV services.