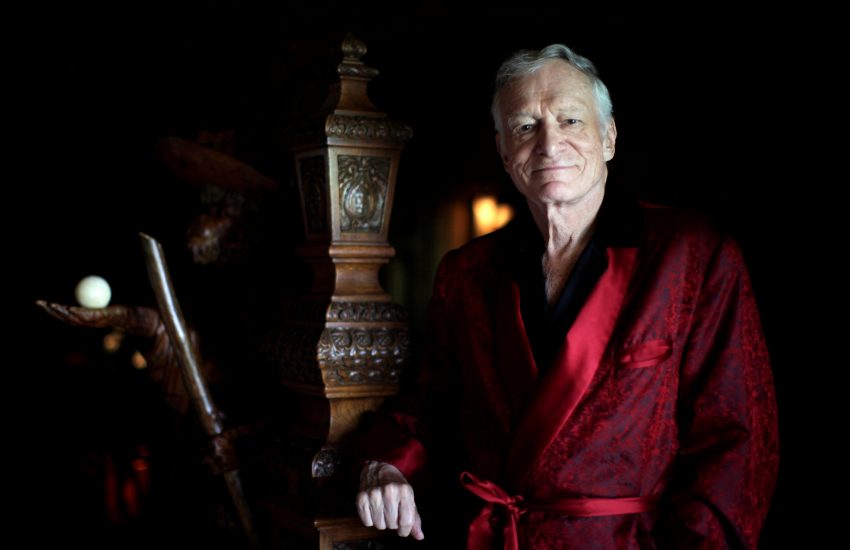 Hugh Hefner, the founder, and owner of the popular entertainment magazine, Playboy, passed away peacefully Wednesday, September 27th at age 91, due to natural causes. He was surrounded by his family at his beloved Playboy Mansion in the Holmby Hill area of Los Angeles. Hugh Hefner was truly one of a kind, often seen strolling his mansion wearing a silk robe, smoking pipe in hand and accompanied by attractive young women. He lived the life of a real Casanova, the dream of every teenage boy to be constantly surrounded by women.  He and his Playboy brand are interchangeable due to the fact that the Playboy image was personified by his philosophy and principles to the point where they both were practically indistinguishable.

Cooper Hefner, the son of the late mogul and CCO of the company his father left behind, stated that his father was a ‘cultural pioneer’ and the greatest advocate for freedom of speech, civil rights, and sexual freedom. On Twitter, numerous celebrities from Larry King and Kim Kardashian West to former ‘Playboy’ playmates Pamela Anderson and Jenny McCarthy, wooed the loss of the great magazine pioneer. The fallen mogul leaves behind his wife Crystal Hefner, who he married in 2012, and four children – Cooper, Marston, Christie, and David. The final resting place for the Tsar of Love is a cemetery in LA, in a plot next to Marilyn Monroe’s grave (the first ever cover star of Playboy), which was bought for $75,000 in 1992. When asked by the Los Angeles Times in 2009 on such a peculiar choice, Hefner replied “Spending eternity next to Marilyn is an opportunity too sweet to pass up.” Hugh Marston Hefner was born on the 9th of April, 1926, in Chicago, Illinois. This was during the Prohibition era where his mother Grace Caroline, a school teacher, and father Glenn Lucius Hefner, an accountant, were strongly devoted to Prohibition. Hefner would often state that his family was Methodist, Midwestern and conservative. Hugh served in the U.S. Army from 1944 to 1946 as a writer for a military newspaper. Later, he joined Esquire magazine as a copyrighter but soon left the job after being denied a $5 raise. After saving $600 and raising around $8,000 from various investors, he launched Playboy. The first issue of Playboy was published on December 1953, featuring Marilyn Monroe’s nude photo from her 1949 calendar shoot, selling over 50,000 copies.

Hefner attended the Sayre Elementary School and then went to Steinmetz College Prep High School.  He received his degree from the University of Illinois at Urbana-Champaign with a double minor in arts and creative writing. He earned his degree within two years of school in 1949. He then took a post-graduate course in sociology from Northwestern University but dropped out before completing his post-graduate education. The home of the late Emperor of Playboy Empire, the Playboy Mansion is located near Beverly Hills and was sold in August 2016 for $100 million to Daren Metropoulos, though the initial asking price was twice as much. Constructed in 1927, the mansion has 29 rooms and is roughly 22,000 square feet.  Designed by the architect Arthur R. Kelly, the overall property sits on 2.1 acres.  The mansion contains a wine cellar, gaming room, a zoo with animal enclosures, a tennis and basketball court, and a waterfall and swimming pool area with a sauna and the famous grotto. Other facilities at the mansion include a patio and barbeque area, basement gym, a large koi fish pond with an artificially created watercourse, along with a fern and redwood forest. The mansion has been most famously publicized for the lavish parties hosted by Hefner during the 1970’s. Perhaps the Mile High Club wasn’t a thing until Hefner arrived on the scene with his shiny velvety black jet. Nicknamed the “The Big Bunny”, this glamorous jet was bought by Hefner during the late 1960s and included onboard showers, a disco, and attractive air hostesses wearing leather outfits. He had it customized for $5.5 million, adding a luxury bedchamber, TV room, and fine dining and lounge area for guests. The aircraft was frequently borrowed by Elvis Presley during his travels, and it was also once used to transport orphans of the Vietnam War to the U.S. Hefner would often be seen escorting playmates and bunnies through the airport to his waiting Mercedes Benz limousine. The girls on his plane, most of whom had been performing as bunnies in various Playboy clubs within Los Angeles and Chicago, were trained at the Continental Airline’s stewardess school.  Hefner was granted special permission by the Federal government to paint the plane black because he wanted it to stand out from other jets.  But after purchasing the Playboy Mansion, Hefner’s need for the jet diminished and in 1975 the plane was bought by Venezuela Airlines. It was in 2004 when the plane was finally put to rest after its last commercial flight for Aeromexico. The jet was originally bought by Hefner straight from McDonnell Douglas’ factory and the registration number read: N950PB.

Facts about Hugh Hefner That Some Might Not Know

Find more entertainment news with the best internet service providers in Los Angeles. Get connected and stay up to date on the latest news and all that’s happening in and around LA, only with the fastest internet speeds available.