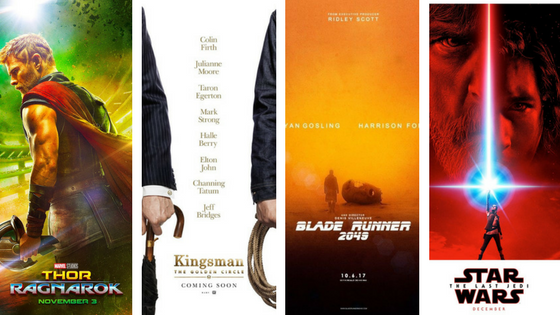 Nothing would be better than ending any movie on a cliffhanger. We have experienced post-movie debates on social media platforms about creating relevant theories to satisfying the ambiguity of a movie, as we have experienced in Blade Runner, Inception, Batman vs Superman, etc. Any movie getting a sequel means that audiences have really enjoyed the first part and that the movie has earned big bucks at the box office. Sequels are automatically subjected to more hype, scrutiny and a potential to make that franchise earn in huge numbers. Making a sequel without reducing the essence of original one is like blazing the torch again in the life of that movie franchise.

Here are some—potentially—one of the biggest movie sequels, around the corner, about to get released in 2017. Thor: Ragnarok, according to the Director, would portray Marvel universe in uniquely different and creative way. The creative freedom given to Watiti would able the upcoming solo Thor movie to have unique creative spark and positive weirdness. Watiti has been given all the creative freedom to utilize in Thor by Marvel. This might cause this New Zealand Director to carve his name in Hollywood. It would be safe to say that this 3rd instalment would serve its audience with Watiti unique humor, as we might observe that in his indie work, along with the burst of emotions. Sarah Marrs, a film critic, wrote that she is excited for Thor: Ragnarok because Watiti talked Marvel into overhauling the Thor franchise, and they actually let him. Matthew Vaughn has come up again with the sequel of his blockbuster spy spoof “Kingsman”. Screenwriter Jane Goldman and Matthew Vaughn adapted Kingsman from Dave Gibbon and Mark Millar’s comics. Vaughn made it obvious by the release of the sequel that Kingsman: The Golden Circle would it extra mile to make ultra-violent and crazy action movie approach in its scenes and tone of the movie. The trailer portrays Michael Gambon as the new head of the Kingsman secret service following the death of Michael Caine’s Arthur in the first instalment. Vaughn mentioned in an interview that Michael was present on set for only one day that might denote putting an end to his character by the missile striking the Kingsman headquarters. He said, “It felt like the right thing to do. We are not Bond, we do what feels right. We are allowed to push the rules and reinvent things.” Let’s all see what Matthew Vaughn has planned for us to watch in his another—potentially—spy spoof blockbuster. Adaptation of Philip K. Dick’s 1968 novel “Do Androids Dream of Electric Sheep”, Ridley Scott’s iconic “ Blade Runner” shows a tale of ex-police officer Rick Deckard, who is forced by police Boss to continue his job and to eliminate four escaped Replicants. This neo-noir science fiction has already been appraised by critics. Denis Villeneuve is looking forward to adding a sequel to Blade Runner continuing the story after 30 years when new blade runner Officer K (Ryan Gosling) found out the secret that has been buried for all these years that would lead him to former blade runner Rick Deckard. Cinematographer Roger Deakins has put cinephiles in awe by releasing the trailer but Villeneuve has mentioned in an interview that it’s just the tip of the iceberg. Appreciating Deakins’ efforts, he said that he doesn’t know how people would react to the movie overall, but he is sure that Deakins did one of his best work. Right after revealing the title of next chapter of Star Wars series: Star Wars: The Last Jedi. All the Star Wars fandom jumped in the raging debate whether the Last Jedi would be single or plural. In an interview with The New York Times, Star Wars’ Episode VIII, Director Rian Johnson put an end on the argument by telling fans that “Luke Skywalker, right now, is the last Jedi”. He was right about that as we can see that, at the end of opening paragraph of The Force Awakens, it clearly describes Luke Skywalker as the last Jedi at Star Wars: The Last Jedi event in Japan,  Johnson revealed that Joseph Gordon-Levitt would be doing a cameo in Episode VIII by providing voiceover for a character in the episode.