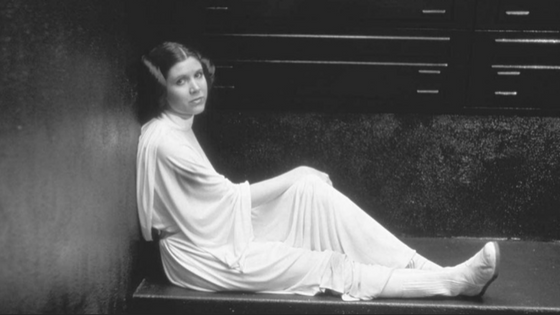 The Christmas Carols and celebrations faded away when the news started to probe over News channels and social media platform. Princess of the Galaxy, Princess Leia of Star Wars left us for an eternal journey. At 8:55 am, Carrie Fisher, the actress prominently known as Princess Leia Organa left this world after suffering a heart attack at the age of 60. She once said:

Carrie Fisher made her debut in a 1975 movie Shampoo followed by her iconic role in the greatest Sci-Fi masterpiece of all times Star Wars as Princess Leia. The character of Princess Leia was a turning point in Carrie’s life. The characteristic hairstyle and the legendary metallic costume became her identity for times to come. The character took out the actual Carrie Fisher where she always had to be the soldier, the frontline, and the center. Explaining Princess in her words she tells that when she first read the script she was excited to play Han Solo and seemed to enjoy killing Jabba the Hutt. She always refused to have a stunt double and enjoyed her part as she regarded acting to be a means of killing a giant monster. This factor faded away in the latter sequels of the movie. It used to seem that the character was really meant for her.  In 1985, she was diagnosed with having a bipolar disorder and she became an activist to combat mental health disorders. During the 90s she merely focused on writing, where she wrote remarkable pieces and scripts for a number of movies and actors namely Lethal Weapon 3 etc. Her wits and expertise in script doctoring made her scripts and screenplays of other writers. Apart from that, she appeared in a number of seasons like Entourage, Catastrophe etc. She claimed her return to the Star Wars franchise as Princess Leia by saying that she had been living in an intergalactic old folk’s home, which was reported as a joke. But in Star Wars Awakens she was seen playing her signature role and having a brief appearance in Rogue One for which she managed shooting before her death.

What Fans and Costars Have to Say:

Costars and fans tweeted mourning her death as:

“She was Princess Leia to the world but a special friend to all of us. We will miss her dearly.” -Kathleen Kennedy https://t.co/E96OuqnFQL pic.twitter.com/lr0rm0sRxc

I’m shocked and saddened to hear the news about my dear friend @carrieffisher. Our thoughts are with Carrie, her family and friends.

I’m always a fan of Star Wars it’s still the greatest ever movie ? my heart goes out to Carrie Fisher she will be missed R.I.P ? pic.twitter.com/KtkbTmJg7e

Carrie Fisher’s loss has created a vacuum for the franchise which cannot be filled. Star War fans and following have a generation of fan following was moved and everybody. Movie fans, the costars, cosplayers who followed her pay their tribute to the lost icon. May The Force Be With Her.