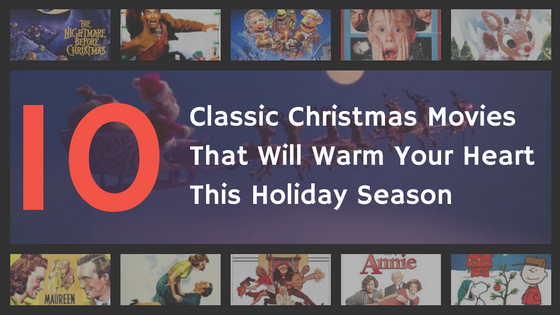 Christmas is almost here! You are barely done with your mad dash for the perfect presents and still have to finalize your plans for Christmas Eve and Christmas Day. Slow down! It’s the most wonderful time of the year, don’t let it rush by! Watch these classic Christmas movies and take a well-earned break. We suggest you get some me-time and recharge before the big day. Put away your to-do list, curl up with a delicious cup of hot chocolate and enjoy one of these classic Christmas movies.

Based on a story by Valentine Davies, this Christmas comedy-drama will melt your cold, skeptical heart. The film takes place in New York and has everything that a Christmas movie needs, love, heart, and warmth. The incredible performances by Natalie Wood, Maureen O’Hara, and Edmund Gwenn will get you into the Christmas frame of mind. This is a truly unique and beloved movie. It plays for 24 straight hours during Christmas Eve/Day and truly captures what it means to be a kid experiencing the holidays. Full of quirky characters and dialogue; be sure to catch this one! Spend Christmas Eve with the McCallister family and dive into nostalgia with the beloved Christmas comedy, Home Alone. Not exactly as old as the other titles on the list, but this fun-filled story has become a major part of Christmas pop culture. Enjoy the antics of Kevin as he deals with the “Wet Bandits”.

Unlike the similarly cynical “Scrooged,” though, “Home Alone” skips the treacle ending to let anti-sentiment have the last laugh. It’s one you’ll have anticipated — but you may want to laugh anyway. You won’t be too busy wiping away tears.—Jean Cooper (Washington Post) Saddle up for a sleigh ride to the North Pole and spend some time with Rudolph and Santa’s elves. Visit the magical Island of Misfit Toys in this stop-motion animated movie. Originally meant as a kids movie, this 1964 classic has stood the test of time. It teaches the importance of being appreciating and accepting those who are different from you. It is shown more than once during the holiday season on all major networks. A combination of the classic Charles Dickens’ novel, A Christmas Carol and the Muppets, what more could you ask for? This version follows the original story pretty closely and yet manages to bring new life and whimsy to the 1843 tale.

“You have a Muppet deliver Charles Dickens’ dialogue, it just takes on a whole new flavor that’s really delightful.”—Brian Henson A movie that never takes itself too seriously, Jingle All the Way is a campy typically 90’s movie starring Arnold Schwarzenegger, Sinbad, Rita Wilson, and Phil Hartman. IGN’s Mike Drucker termed it ”so-corny-its-good”. This TV special first aired in 1965 and is based on Charles M. Schulz’s beloved comic strip, Peanuts. Join Charlie Brown as he tries to learn what Christmas truly means. This heart-warming tale of friendship will get you into the spirit of the season. The Nightmare Before Christmas is a tale filled with imagination that will transport you into a wonderful magical world.

“The Nightmare Before Christmas has something to offer just about everyone. For the kids, it’s a fantasy celebrating two holidays. For the adults, it’s an opportunity to experience some light entertainment while marveling at how adept Hollywood has become at these techniques. There are songs, laughs, and a little romance. In short, The Nightmare Before Christmas does what it intends to: entertain.” Let’s face it, you were probably expecting this title to pop up. Some of you might consider it a cliché, but those people need to come down from Mount Crumpit. No holiday to-watch list is complete without this timeless heart-warming classic.

“The film has a life of its own now, and I can look at it like I had nothing to do with it.”—Frank Capra (Producer and Director)

This classic tale is set in the quintessentially American small town of Bedford Falls. The hero of the story, George Bailey, is a dreamer who goes through his share of ups and downs. He almost gives up when disaster strikes, but makes an inspiring recovery. It’s a thoroughly festive and ageless story that will remain a Christmas must-watch for years to come.

Catch it on NBC this Christmas Eve! Don’t have NBC? Sign up for U-Verse TV and enjoy all classic Christmas movies this holiday season!