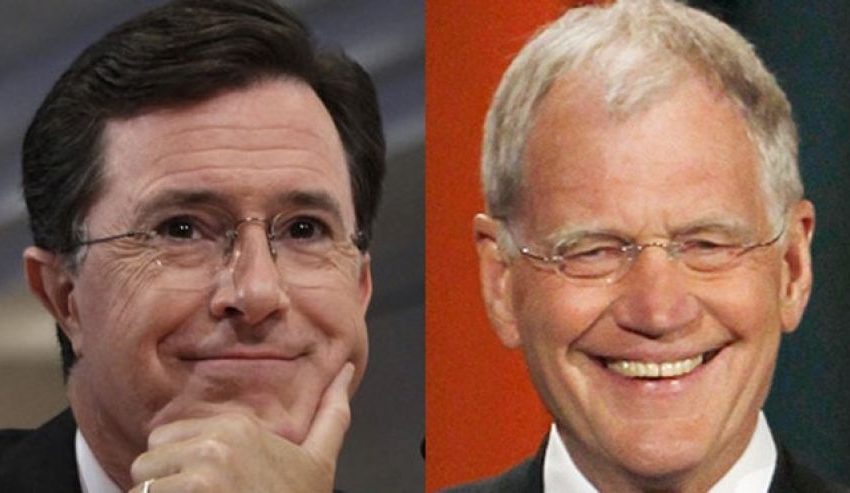 The news is out and it’s causing quite the sensation in the television entertainment world: Stephen Colbert is the number one, most likely candidate to take the reins and reign over late night as David Letterman’s replacement on CBS’ notorious Late Show.

Letterman hasn’t exactly been too shy about his leaning toward retirement as he’s been in the Late Show spotlight for 33 years now. Continuing to remain in a cloud of vagueness concerning his actual retirement date, Letterman hasn’t made any specific comments about his departure. CBS isn’t dishing out the details either, perhaps because they don’t want to, or maybe because there just aren’t any available yet. In a public statement, CBS said plainly, “We’re not commenting on any rumors or speculation about succession.” As for Colbert’s Comedy Central home-team spokespeople, they’re not fessing-up to anything either.

It’s worth noting that there aren’t any hard feelings between Letterman and CBS. By all accounts, Letterman’s leave-taking is self-motivated and apparently very much looked forward to by the 66 year old TV legend. This was relatively well-known by the public when he signed his one-year contract extension which would keep him onboard with late night all the way through 2015.

There are still no formal contract discussions on the table between Colbert and CBS, meaning that there is still no actual agreement in writing, but it is clear that Colbert reached out to CBS in initiating the possibility of replacing Letterman while the Late Show host himself was still scratching his head and thinking over his retirement schedule. It’s true that there are other players at bat that could potentially take the wheel, which interestingly enough includes Colbert’s esteemed colleague Jon Stewart, but the clichéd Conservative comedian is ultimately the first runner up. Other names on the table for Letterman’s replacement include Neil Patrick Harris, having just wrapped up his time on CBS’ How I Met Your Mother, and the seasoned late night talk show host Craig Ferguson who follows Letterman on weeknights. At this point, Neil Patrick Harris appears to be a bit of a wild draw of the cards, and Ferguson, though generally enjoyed for what he does on The Late Late Show isn’t exactly a sure-thing for taking over the Letterman legacy. As for Jon Stewart himself, initially it seemed as though he may have been a shoe-in, but it seems he’s got enough on his plate as it is hosting The Daily Show and directing feature films, his debut in this avenue of entertainment being the recently shot Rosewater. Hosting a nightly comedy talk show isn’t exactly a leisurely gig, so Stewart seems to be content with his call.

A crucial note in timing is in play as well seeing how Stephen Colbert’s hosting contract for The Colbert Report on Comedy Central actually times out at the end of 2014. This is obviously allow him plenty of free-time to clear out his desk and scootch over onto Letterman’s seat at CBS. Again, it’s unsure when and if this will actually take place. Letterman himself noted, “We don’t have the timing of this precisely down; it will be at least a year or so.But at some time in the not-too-distant future — 2015, for the love of God.”

So what would it be like to see Colbert on the Late Show throne? The comedian noted that he would ultimately hang up his political persona that he’s famously known for from The Colbert Report and allow himself to let his hair down and just be himself. Although it’s quite rare that Colbert would actually step outside of his quirky comedic character from Comedy Central, his style of humor truly parallels and compliments Letterman’s quite well, living comfortably in the vein of charming sarcasm and keen guest dialogue.

It’s ultimately only a matter of time before the big revealing, and it’s likely to be a fun game-changer.