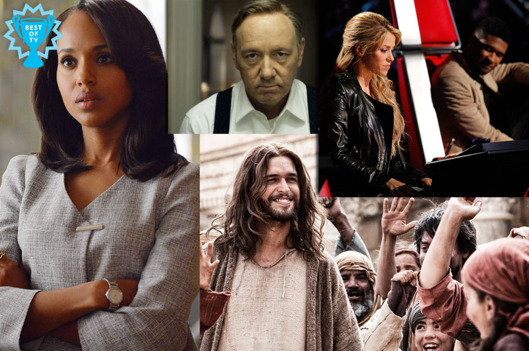 With the latest and greatest (and not-so-greatest) fall programming on parade, this year’s fresh television series meat has officially premiered and is up for market. And guess what – the results for who’s here to stay and who’s taking a trip to the dumpster are trickling in. As always, this year was a hefty mixed bag of interesting doozies and sour duds. Take a peek at television’s best and worst of this fall season:

With a second season of spooky drama recently announced to be on the way, Sleepy Hollow is officially this fall’s very first newly released network series granted an upcoming season. Boasting a potent premiere pool of 10 million viewers, the series quickly took off and reach 22 million after a well-gauged time-shift took place.

In this modern-day twist on Washington Irving’s classic, ICHABOD CRANE (Tom Mison, “Salmon Fishing in the Yemen”) is resurrected and pulled two and a half centuries through time to unravel a mystery that dates all the way back to the founding fathers. Revived alongside Ichabod is the infamous Headless Horseman who is on a murderous rampage in present-day Sleepy Hollow. Ichabod quickly realizes that stopping Headless is just the beginning, as the resurrected rider is but the first of the Four Horsemen of the Apocalypse and only one of the many formidable foes that Ichabod must face to protect not only Sleepy Hollow, but the world.

A single-camera workplace comedy about a larger-than-life advertising genius whose unorthodox methods and unpredictable behavior would get him fired… if he weren’t the boss. Simon Roberts is the head of a powerful agency, with the biggest clients and brands in the world, but even more important to him is having his daughter Sydney by his side. As his partner, Sydney is Simon’s exact opposite – focused, organized and eager to make a name for herself, but also too busy parenting her father, which she’d resent if he wasn’t so brilliant at what he does. Joining them in the firm are the dashing and talented Zach; art director Andrew, who’s as hard-working as he is neurotic; and the beautiful and deceptively smart assistant Lauren. With his team and his daughter behind him, Simon continues to set the advertising world on fire, and it looks like they are definitely buying what these crazy ones are selling

Averaging at around 12 million viewers over the course of the newly released show’s first two weeks, this show had mustered quite a dedicated following. It will be interesting to see where actor James Spader will take us next in this griping crime-drama.

For decades, ex-government agent Raymond “Red” Reddington (James Spader, “The Office,” “Boston Legal”) has been one of the FBI’s most wanted fugitives. Brokering shadowy deals for criminals across the globe, Red was known by many as “The Concierge of Crime.” Now, he’s mysteriously surrendered to the FBI with an explosive offer: He will help catch a long-thought-dead terrorist, Ranko Zamani, under the condition that he speaks only to Elizabeth “Liz” Keen (Megan Boone, “Law & Order: Los Angeles”), an FBI profiler fresh out of Quantico. For Liz, it’s going to be one hell of a first day on the job.

On the Way Out…

Premiering to a low 6.4 million people this fall, and slowly slumping all the way down to 2.9 million, We Are Men has become CBS’s worst rated comedy and the clock is ticking as to how long it’s time slot will be replaced.

‘We Are Men’ is a single-camera comedy about four single guys living in a short-term apartment complex who unexpectedly find camaraderie over their many missteps in love. Carter, the youngest and most recent addition to the group, moved in after being ditched at the altar mid-ceremony, and is now eager to re-enter the dating scene and get on with his life with some guidance from his “band of brothers”: Frank Russo, a successful middle-aged clothing manufacturer and four-time divorce who still fancies himself a ladies man; Gil Bartis, a small business owner who was caught having the world’s worst affair; and Stuart Weber, a speedo-wearing OB/GYN who’s hiding his assets until his second divorce is settled. Abby is Frank’s charming and attractive daughter, who stands as the one positive remnant from his failed relationships. Armed with a hot tub, pool-side barbeque and plenty of questionable advice, these losers in the marriage department take Carter under their wing to impart their own brand of wisdom about the opposite sex. This ABC drama is officially the first new falls series to be canceled after only two episodes. Enough said…

Nestled in the culturally diverse neighborhood of Astoria, the Gold Star Gas N’ Shop is home to a surrogate family of co-workers whose lives will be transformed by an unexpected lottery win. Aside from the money, relationships will change as the trust between two brothers will be uprooted, budding romances will develop and secrets will come to the surface.

Welcome to the Family

This TV bomb was ranked as the lowest-rated Thursday comedy in NBC history and premiered to less than 3 million viewers.

Dan Yoder (Mike O’Malley, “Glee,” “My Name Is Earl”) and wife, Caroline (Mary McCormack, “In Plain Sight,” “The West Wing”), think they finally have it made. Their daughter, Molly (Ella Rae Peck, “Deception,” “Gossip Girl”) – not the most diligent of students – has managed to graduate from high school and has been accepted to college. Her proud parents are looking forward to an empty nest and are breathing a heavy sigh of relief. Across town, Molly’s secret boyfriend, Junior Hernandez (Joey Haro, “Glee,” “Awkward”), is graduating from his high school with top honors and has plans to go to Stanford. Parents Miguel (Ricardo Chavira, “Desperate Housewives”) and Lisette (Justina Machado, “Six Feet Under,” “ER”) are bursting with pride. Everything seems like it is falling into place for them, but unbeknownst to both families, Molly and Junior are about to become parents themselves.