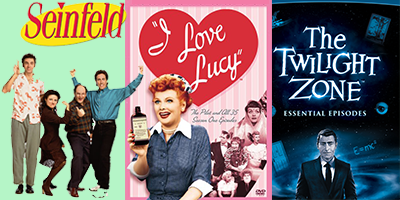 America’s very first regularly scheduled television service began on July 2, 1928, and ever since then most of us have never completely let our eyes wonder too far away from the screen. Equally as consistent, the battle of whether or not this immediate habit-inducing medium was, and is, to our ultimate benefit instantaneously became the subject of a ‘more than slightly heated’ debate. But at its essence, aside from being a means of flash pan-rapid information dissemination, people are glued to the “boob tube” because it offers a much glorified avenue of quick and comfortable means of entertainment. So, in honor of this square-shaped glowing box of captivation, why don’t we take a look at the top three most fun-to-watch television shows of all time?

Comedian Jerry Seinfeld stars as himself in this knock-out classic comedy series along with his three more than slightly eccentric pals, Kramer, Elaine and George as played by Michael Richards, Julia Louis-Dreyfus and Jason Alexander respectively. Crowned as one of the absolute most-beloved and greatest monuments in international pop culture, Seinfeld, co–written by Larry David of the now highly acclaimed Curb Your Enthusiasm, became an instant television phenomenon after its debut in 1989. The premise was so simple you’d think the title of the show was spelled S-u-c-c-e-s-s. Episode after episode, we all followed along as Jerry and his lovable menagerie went about their everyday lives while hurtling common, relatable situations in the quirkiest ways possible. With social goldmine of New York as their playground, fans instantly fell in love, especially as it became known that the stories and subject matter of the show were inspired by real life events.

You love Lucy. We love Lucy. Let’s face it: we all love her, and she’s been making us laugh episode after episode since the show first aired on June 15, 1951. Lucille Ball and Desi Arnaz are household names, while William Frawley and Vivian Vance are forever immortalized as Fred and Ethel, the sassiest married duo the 1950’s ever saw. America had never before witnessed a televised family friendly comedy act of such a hilarious and highly dynamic caliber until Ricky Ricardo and his tenaciously determined, stardom-bound housewife Lucy McGillicuddy hit the scene with most of the action taking place in a quaint New York apartment building.

I Love Lucy ranked as the most watched show in the U.S. in four of its six total seasons. The show was also the very first to draw the curtain while at the top of the prestigious Nielsen ratings which was only years afterward achieved by Seinfeld and the heart-melting Andy Griffith Show, and is to this day still syndicated in dozens of languages spanning the globe. 2002’s TV Guide’s list of the greatest shows in television ranked I Love Lucy as number two closely following Seinfeld and just ahead of The Honeymooners.

Everyone knows the theme song. Even today’s youngest “goggle-box” viewers have seen at least an episode or two of The Twilight Zone courtesy of the wide-eyed nostalgia of their dad or grandpa. Rod Serling wittily and artistically weaved together the fabric of science-fiction and fantasy beginning in 1959 and lasting until 1964. The anthology of independently presented stories of unusual events contained more plot twists than a backwards, upside-down, inside-out pretzel and quickly became a critical success. In 1997, TV Guide’s 100 Greatest Episodes of All Time marked episodes “To Serve Man” and “It’s a Good Life” as 11 and 31 respectively. The Twilight Zone was also awarded the number 26 spot in the 2002 edition of TV Guide’s 50 Greatest TV Shows of All Time. And further proving the show’s longevity, just this year the Writers Guild of America praised the franchise as the third best written TV series ever.